If you’re a live performer or public speaker, you’ll want a public address system that can deliver the best sound quality to your audience. When shopping for PA systems, you’ll come across several options to choose from. One of the toughest choices you may have to make is choosing between JBL Eon One Vs Bose L1 Compact.

These two PA systems are some of the best choices in the market today. They’re highly portable as they comprise speaker drivers, a subwoofer, and a power amp built into one unit. They’re most suitable for performers who are always on the move and those who perform in smaller venues such as small clubs or cafes. Also, they’re ideal for addressing audiences in the office, schools, and small groups.

Although they’re both portable PA systems, they have certain differences that might make you choose one over the other. For instance, when shopping for a PA system, you’ll need to consider various factors such as size, power, wired or wireless microphone, functionality, connectivity options, and whether it’s battery-powered or AC-powered.

In this article, we’ll discuss Bose L1 Compact vs JBL Eon One to assist you in making an informed choice between the two. 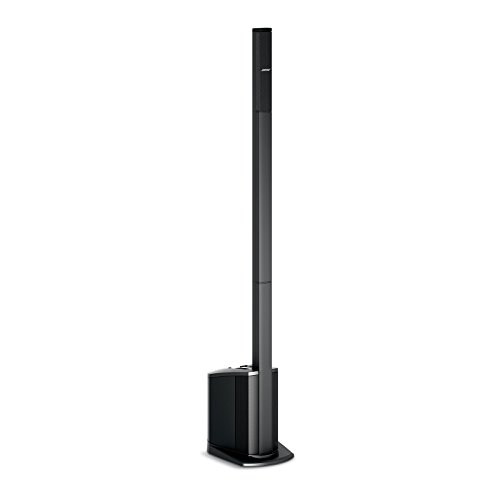 A Review of JBL Eon One

The JBL Eon One PA system has many desirable features. Let’s review it in detail below.

With this PA system, you’re guaranteed of getting full-range sound. The speaker features a frequency response of between 37.5 Hz to 18 kHz. That means it’s able to reproduce most audible low, midrange, and high frequencies. The PA system comes with a built-in amplifier with a power output of 380 watts. It delivers clear and loud sound rated at 118 dB maximum. Additionally, the amp is designed as a Class D amp for enhanced power output.

The speaker system features a linear array setup that ensures that each speaker driver has its optimized space and is angled in such a way that it delivers great sound output all around it. Thus, your audience will get clear sound regardless of their listening position from the speaker. Furthermore, it’s designed in a way that it projects sound to three listening positions around it regardless of the environment you’re using it.

Another great feature of this sound system is its built-in 6-channel mixer. You can easily control the mixer using the onboard controls. The mixer will allow you to adjust the tone, adjust the volume from multiple inputs, and ensure all the inputs sound great together for audible sound output. The mixer also features an equalizer, which will allow you to isolate certain frequencies or lower or boost them as needed.

Although it doesn’t come with a microphone, you can connect your microphone through the microphone input port. It also features a line-level input, two XLR inputs, and two RCA inputs.

The JBL Eon speaker system is relatively light. It weighs 40.8 pounds. Although it’s heavier than some PA systems, it’s still more portable than most AC-powered PA speakers. Its compactness and linear array design still make it a portable choice.

It also features a height space that can be adjusted as needed. You can retract the adjustable column down into the base of the speaker system to make it a more compact unit for easier transportation. It’s still possible to carry the speaker system with your hand.

The JBL Eon One speaker projects sound perfectly from the sides and the front. It’s suitable for both speech and music applications.

A Review of Bose L1 Compact

The Bose L1 Compact is yet another superb PA speaker system. Here’s its review and most notable features.

When comparing JBL Eon One vs Bose compact, you’ll notice that Bose Compact also features two speaker sets including one subwoofer and six drivers, just like the JBL Eon. The 6 speaker drivers measure 2-inches each whereas the bass driver measures 8 inches.

Overall, the speaker system delivers a power output of up to 200 watts, thanks to the powerful built-in amplifier.

The Bose L1 Compact speaker system features a special design that allows for wide sound projection to an angle of up to 180 degrees. This wide sound dispersion allows for clear sound in the venue. The speaker can be placed on the side or behind for your audience to get the best sound experience. Also, you can use the speaker system with the column extended or collapsed depending on the kind of sound projection you want.

The Bose L1 PA system comes with 2 tone-match channels and 6 I/O controls. The 2 preset channels allow you to customize the sound when using a guitar and a mic. It also comes with an equalizer on the mic channel.

It supports wireless connectivity options such as Wi-Fi and Bluetooth music streaming.

Its wireless music streaming capabilities enhance portability. Besides, it only weighs 29.2 pounds. Its minimal weight makes it highly portable. You can collapse the column to make it a single, compact speaker system for easier transportation. You can fit it in the trunk or back seat of your car during transportation.

Its design and performance make it perfect for duo or solo performances in smaller bars and clubs.

Which Is Better between Bose L1 Compact vs JBL Eon?

Both Bose L1 and JBL Eon are portable PA systems. Although they’re designed for the same purpose, they have significant differences. For instance, JBL Eon proves to be more powerful considering it has a 380 watts amplifier whereas Bose L1 has a 200 watts amplifier. That means that the JBL Eon is more ideal for dispersing sound to a larger crowd or venue than Bose L1.

On the other hand, Bose L1 is lighter than JBL Eon. Bose L1 only weighs 29.2 pounds while JBL Eon One weighs 40.8 pounds. Thus, you’ll find it easier to carry the Bose L1 speaker system than the JBL Eon speaker.

Both speaker systems come with 6 controls for I/O features. Although both support Bluetooth connectivity, the Bose L1 speaker has an extra feature for supporting Wi-Fi music streaming.

Also Read: Keyboard Amp or Powered Speakers: Which is my Choice

On the other hand, Bose L1 is more suitable for louder bass output and for anyone who’s always on the move due to its lighter weight. Also, JBL Eon covers a wider frequency range than Bose L1.

Regardless of the choice you make between these two PA systems, you’ll need to buy a separate microphone as they don’t come with one. Also, they’re not battery-powered such that you must connect them to an AC power outlet.